An aeolian harp is driven by wind, so this needs a very windy day and an exposed site to work. Named after the Greek god of the wind, these harps are usually made from a wooden box and strings stretched between two bridges. This activity uses a simpler construction using a bucket, some strong fishing line and a peg.

An Aeolian harp in the classroom

With a bit of cunning, you can explore the excitation of strings by wind even when it’s not windy. If possible, get hold of a purpose built aeolian harp. It will need a smooth (laminar) ﬂow of air across its strings which you can get by funnelling the air from a domestic fan.

Engineering the noise created as a car moves through air is vital to make a great sounding vehicle. Doing this for the new Continental GT Convertible was challenging but definitely exciting. Reading the reviews once the car was launched was a particular highlight!”

Career case study: more about Ben’s job and how he got into acoustics

How does the wind play the string?

The motion of the wind across a string causes vortex (swirl) downstream that ﬂips from one side of the string to the other. In the animation below, the white circle is the string and the green and purple stuff the vortexes. The alternating vortex causes the string to vibrate up and down (not shown in the animation).

The frequency created by the vortex shedding of the tone is given by the following equation:

where d is the string diameter and u the speed of the wind. This then excites any string harmonics that are at a similar frequency [1]. When you pluck the string of a guitar the loudest sound is normally the fundamental. But when the wind blows across the harp string you normally hear a much higher note, a harmonic of the fundamental note. As the wind blows, the tension changes, and this alters the frequencies of these harmonics, producing some interesting sound effects.

Why does the harp make such eerie sounds?

It is unusual to have a musical instrument where the sound waxes and wanes depending on air speed, which is one reason it sounds unusual. The changes in pitch and amplitude are unlike any other instrument.

What does the bucket/bin do?

The string itself has a very tiny surface area so it doesn’t move much air (indeed, it’s the air that’s moving the string in this case). By itself, the string makes a tiny sound, but because the string is attached to the bucket, the vibrations pull on the base of the bucket and make it vibrate the same way. The bucket has a large surface area and so it pushes a lot of air and makes a big sound. What makes the effect even stronger is that the volume of air in the bucket also resonates. This is very similar to how a the sound of a string is amplified by the body of an acoustic guitar.

I loved this content. My name is Nasnuven Paulo and I’m for a long time interested in aeolian harps. Some years ago I almost developed one, at the college I already graduated. Nowadays I’m planning to do something about it. Restarting my researches, in here i found leads for it. Thanks for the contribution, by the way. I’d love to know more about. Could you recommend any bibliography about the theme? I use to love any content that talks about sound, acoustic, cymatics, physics, etc. Best wishes, Paulo. 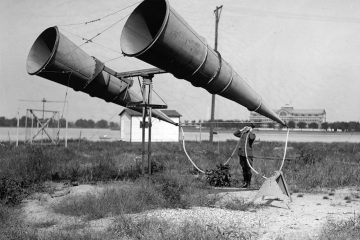 The listening devices on these pages are a great way of getting people to explore hearing. By playing with the ambient sound, they create a starting point for talking about sound and hearing. They’re especially Read more…

Vegetables can make remarkable musical instruments. Students are challenged to make instruments and explore the science of sound. It gives students a chance to tackle a creative acoustic engineering problem of how to work with imperfect materials. It Read more…